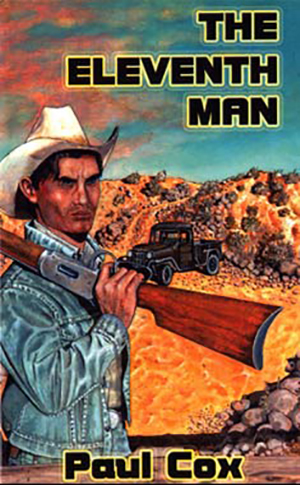 A contemporary western, The Eleventh Man, was written a few years prior to the attack on the World Trade Center. As this story dealt with the first terrorist attack on U.S. soil, some revisions had to be made before finally submitting the work for publication. Unfortunately, what occurs in The Eleventh Man could still happen.

Part of the research for The Eleventh Man entailed a solitary forty mile horseback ride on the old Pony Express Trail near Austin, Nevada. Paul has always been grateful to the rancher that granted him access to that trail and for the gracious hospitality during his stay.

In The Eleventh Man, Jason Burkhart lost his wife in a tragic accident in San Francisco. To find peace, he moves to the high deserts of Nevada and, swearing he will never again work as a paramedic, tries his hand at ranching. All he desires is to be left alone, but a jealous county sheriff won’t cooperate. And Kimberly Whitney, the sheriff’s girlfriend, owns the neighboring ranch. Even worse, on one last trip to San Francisco, he is mistakenly abducted by terrorists along with ten other young men. Facing death by execution, Burkhart must take desperate measures to survive. Burkhart flees the airport for the solitude of the desert. But thanks to the sheriff, his hopes of remaining hidden do not last and once more Burkhart takes matters into his own hands.