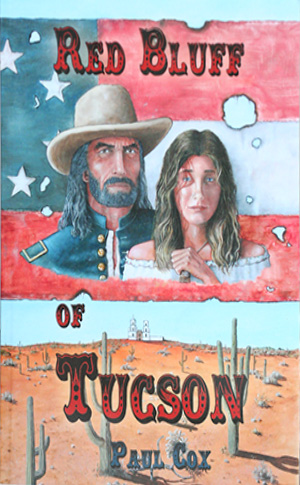 Picacho Pass is a little known area in Arizona but it is the location of the westernmost battle of the Civil War. There, in 1862 and in what was actually more of a skirmish, Union troops from California clashed with Confederates of Texas. Tucson was at stake and with it the vast gold and silver deposits of that region. The goal of the South was not only to secure the mineral deposits but to create a coast to coast Confederacy that included Southern California and its many Southern sympathizers. Had the plan succeeded, our history would have been radically altered.

In 1882 Tucson was the center of the Apache wars. It was the opinion of General Crook and others that a ring of contractors located in and around Tucson helped create much of the Indian unrest. Known as the boys or The Ring this secret group of businessmen was said to compose what amounted to a crime syndicate.

Red Bluff of Tucson ties both time periods together by bringing a carousing Confederate lieutenant, Caleb Felton, to Tucson where he meets an innocent young woman, Bricela Verde.

The two discover a mutual and immediate attraction for one another. It is unexplainable yet undeniable. To propel this part of the story, Paul Cox relied on his research that delved into a large number unusual events involving both whites and Indians. Some, like those experienced by General Custer, are referred to as premonitions. Others like those of Geronimo, Sitting Bull, Nana, and Chochises warrior sister, as clairvoyance. Cox refers to it simply as medicine, an English word the Indians said was a very poor translation of a phenomenon they understood but could not describe.

The relationship between Caleb and Bricela flourishes but very briefly. War, in its various forms, tragically intervenes. The two are separated for twenty years until Bricela, still living in Tucson and fighting The Ring, needs help from someone she can trust. Having long believed Caleb was killed in the war, she is hesitant to accept the rumor that he is now a Texas Ranger using the assumed name of Conway Fargo. On the advice of Jesus Elias, a friend that holds a dark secret about her past, she sends a letter to Fargo. In coded language only Caleb Felton would understand, she asks if he is actually her long lost lieutenant.

The year is now 1882 and Bricela is married but childless. She doubts Fargo is truly Caleb Felton because Caleb loved her. He would have at least written. No matter how bad the war was, letters did get through. Her suspicion that Caleb is alive makes her uneasy, almost angry. She can not understand why she never heard from him. And unlike Caleb Felton, Conway Fargo is said to be a ruthless killer.

Conway Fargo receives the letter and is shocked. Bricela was so young when they met and yet she still remembered him. But what else did she remember? Only a handful of people knew what happened twenty years ago. Had Jesus finally told her the truth? As Caleb Felton, he wanted nothing more than to protect her but now she wanted to see him. He had to go but would it open an old wound, a wound that was best left alone?

To research Red Bluff of Tucson Cox made several trips to the area and reviewed a half-dozen old maps of the Tucson pueblo that were willingly supplied by the Arizona Historical Society. He inserted several cameo appearances of historic characters both to add authenticity and to honor their presence in a harsh land during such desperate times.

He also located the actual site of the battle at Picacho Pass (not quite where the national monument is located) and visited the San Carlos Indian Reservation to get a first hand idea of how desolate that part of the desert is. According the author, the only thing better than writing, is the research. It is then, he says, that our history comes alive and we understand what it is that makes us uniquely American.

order now on amazon »
available as audiobook »
“As with all of Paul’s previous works, I found Red Bluff of Tucson hard to put down. Having spent much of my life in the desert, I appreciate his vivid and accurate description of the terrain. As a horseman, rancher and Western history fan, I find it very easy to infuse myself into Paul’s writing. That was especially true of Red Bluff.”
Gary Gwin
Red Desert, Wyoming Territory
Copyright © 2023 Paul Cox. Site by Keokee Media + Marketing.