Fire in the Rain 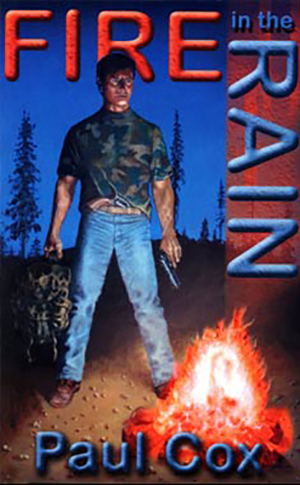 After writing The Last Scalp and The Eleventh Man Paul Cox felt it necessary to tell a story that had been piecing itself together over a period of years. Though not a western in the traditional sense, it does deal with the spirit of the west and involves the entire interior western United States. It was written two years before our present economic collapse yet the national circumstances described in the book and used to set the stage for the plot turned out to be almost prophetic.

It should be noted that some men and women live by principle, some of which are inviolable. Protecting one’s children from injustice, no matter what the price, is one such principle. Protecting the rights of parents is another.

Fire in the Rain begins in the near future. There is a female president, and a severe recession. The coastal states are doing well but the so called “fly-over” states are being ignored in Washington and ham-strung by oppressive environmental regulations. Tempers in the west are growing short, unemployment is skyrocketing and Justin Mabry has recently been through a devastating divorce. The conditions are perfect for disaster.

Looking for a quiet place to raise his twelve-year-old son, Mabry moves to Clark Fork, a small town tucked away in the Rocky Mountains of North Idaho. Desiring nothing more than simplicity, personal solitude and to teach high school history in the fall, Mabry is content to live a hermit’s life but his son needs more.

Billy Mabry is twelve and loves baseball. He needs to socialize as well so Justin Mabry agrees to let him play ball in the nearby town of Sandpoint. Billy’s season goes well and he is selected to be on the All Star team. He is to start the first game as catcher but what should have been a memorable Little League game becomes a matter of principle, a time to teach his son that doing the right thing is of utmost importance but could also be costly. Yet the price Justin and Billy Mabry must pay turns out to be far greater than anything he or the United States government could have imagined.

order now on amazon »
available as audiobook »
“This is a compelling story that is not only believable but prophetic. The reader sometimes thinks he is reading actual news accounts rather than fiction. Great research and story line makes this novel unforgettable.”
Ray Miller
Former mayor of Sandpoint, Idaho
“Fire in the Rain was a great read about a possible American revolt that starts in North Idaho. This outstanding second book wraps up the saga nicely but only future unfolding events will end this story.”
Delbert Hathaway
Spokesman for the North Idaho Militia
Copyright © 2023 Paul Cox. Site by Keokee Media + Marketing.